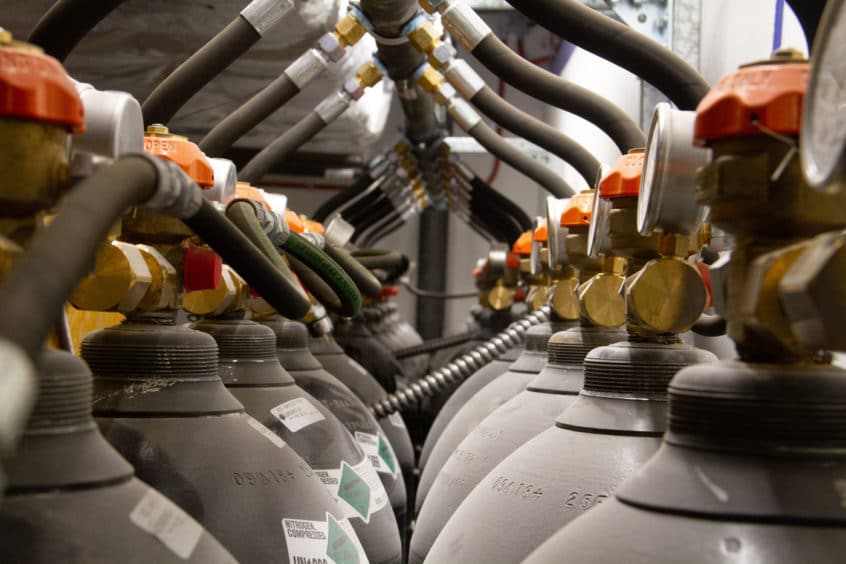 Cox Fire is pleased to have been selected as the Fire Sprinkler Contractor for USF Health’s downtown Water Street Morsani College of Medicine building.

The Victaulic Vortex system installed at USF Morsani consists of 7 total zones. The zones are supplied by a common manifold filled with 44 nitrogen tanks. The manifold is release via 2 common fluid releasing panels to the zone in alarm. Each zone is controlled by 1-2 zone panels that release the air-nitrogen into the system when tripped.

The USF Health Morsani College of Medicine and Heart Institute is moving in 2019, bringing approximately 1,800 students, faculty and staff to live, work and study along the downtown waterfront as a key anchor at Water Street Tampa. The USF Health Taneja College of Pharmacy will start classes there in fall 2021. By moving within a mile of its primary teaching hospital Tampa General Hospital, USF will attract the brightest students and faculty, and will increase federal research dollars to fight heart disease.

The downtown site will position the medical and pharmacy schools in proximity to USF Health’s primary teaching and clinical affiliate, Tampa General Hospital, as well as its world-class simulation center, the USF Health Center for Advanced Medical Learning and Simulation and other surrounding facilities. TGH will also lease nearly 25,000 square feet in the building, including spaces for urgent care, imaging and executive wellness.

The announcement of the expansion of the Morsani College of Medicine into the downtown district is already a positive impact on recruiting top-tier students. USF has become the most selective medical school in Florida, with applications rising 40% since the 2014 announcement of the downtown move. With more than 30 applicants vying for each seat in the MD program, incoming student credentials have skyrocketed, and the MCAT scores for the past four entering classes were in the top 10% of all U.S. medical schools.